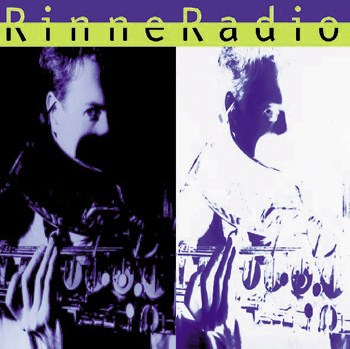 "Those, who are not busy being born, are busy dying",
sang Bob Dylan ages ago. The truth is still in there. I can't think of
any motto that would fit RinneRadio better. The band has been changing
continually, and still does, but from the very beginning it has had it's
own thing going. Sometimes you might not know exactly what you should,
or could, call that thing, but always it has been recognisable. Underneath
the different clothes RinneRadio always has its own very personal soul
and character. And a sence of humour. Although it has never been a joke
band. RinneRadio has that underlying attitude that playing music should
be fun and exciting and not an academic excercise. It can be deep, but
never boring. This radio has always transmitted live on the spiritual
level and curiosity never killed these cats. On the contrary, it has kept
them alive and kicking! The record you are now holding is more than their
first. It's their absolute starting point.


In 1988 Tapani Rinne was happily blowing his horns (tenor, soprano, barytone,
alto, clarinet) in Edward Vesala's Sound & Fury, when Vesala suggested
they make a solo album for Rinne on Vesala's own Leo label. Something
more rhythmic and reflecting the current musical styles more broadly than
Sound & Fury's avant-jazz witchcraft. The idea came out of the blue
to Tapani, but he jumped at the chance. Why not? At 26 he was already
a very experienced musician having played professionally everything from
easy listening and Finnish novelty songs to blues, rock, soul, different
kinds of jazz, symphonies and experimental music, plus teaching bass clarinet
at the Sibelius Academy. He also had composed his own tunes since teenage.

In the end the record came to include only one of Tapani's tunes (Ula)
the rest being Vesala's, who also produced and played the drums. Propably
that was for the good of the record. In any case it sounds fresh today,
ten years after its initial release. Let's Have Donc Line gets funky with
a mischievous attitude while Ula grips you with its bluesy rifferama and
screaming theme, and Walking Eyes seduces with its cool melodies and dynamic
rhythmic nyances. The slow skanking reggae of After You've Burned Your
Cards and the cinematic elegance of But Anyway Green turn out to be timeless
jewels.

Tapani's multilayered blowing is brilliant throughout and Seppo Tyni treats
you to plenty of wild, grinningly kinky guitar work while also playing
real nice bass lines. Iro Haarla never really became a full member of
RinneRadio, but here she plays synthesizers, organ, piano and even some
harp (the stringed type) with imagination and style. Vesala - a one of
a kind combination of ancient Finnish shaman, Max Roach and Keith Moon,
whose input to the Finnish jazz and rock scenes has been significant -
keeps the rhythms down to earth so that Tapani and Seppo can freak out
from a solid base.

- I saw that Tapani, like (guitarist) Raoul Björkenheim, was one
of my pupils, who clearly wanted to be more than just a top-notch session
player, so I encouraged him to spread out. I felt he was a sure and safe
investment, because he was the type that, once you give him some energy,
he runs with it and makes it grow. That's always very satisfying spiritually,
if not economically, Edward Vesala says now reflecting his feelings of
this album.
- Eetu taught me the right attitude. He made me think more deeply about
music, offers Tapani, who regards Vesala as his most important teacher.

So, turn your RinneRadio on and take a trip with this first program. It
will be interesting in many ways, if you are familiar with RinneRadio's
later transmissions - so far seven dynamite albums, one of which, Pfft,
is a live remix by Pan-Sonic's Mika Vainio - which have included, for
instance, some amazing joikk chanting from the brilliant Samí singer
Wimme Saari, mind-altering ambient atmospherics and hypnotic trance/drum'n
'bass rhythms from the machines of Tommi Lindell, Kimmo Kajasto, Jari
Kokkonen and the turntables of DJ Freakmaster K.One (the latter two constitute
RinneRadio with Tapani at the time of my writing this at the end of 1998)
not to mention Tapani's horn magic, which in recent years has mostly been
created with the soprano sax. If you don't know the later albums, you'll
get the appetite with this one and then you really are in for a wild musical
adventure, when you start checking them out one by one.
JUSSI NIEMI (1998)